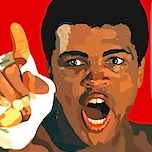 Many easy accolades for Mohammad Ali but maybe the best is “A Muslim who put friendship and other people over dogma and belief.” A true citizen of the world, musician, poet, actor, political commentator, Civil Rights leader, counterculture icon, one of the most famous and celebrated sports figures of all time; he was arrested, convicted of draft evasion, mired in a Supreme Court trial but still became the only three-time lineal world heavyweight champion and the only boxer to be named Fighter of the Year five times. Graduating high school # 376 in a class of 391, he received an honorary doctorate from Princeton University. He actively supported Native American rights, the Palestinians, Israelis, poverty alleviation in Africa, peace in Iraq, and numerous philanthropic projects.

“Live everyday as if it were your last because someday you're going to be right.”

“It isn’t the mountains ahead to climb that wear you out; it’s the pebble in your shoe.”

“Service to others is the rent you pay for your room here on earth.”

“Damn the money. Damn the heavyweight championship... I will die before I sell out my people for the white man's money.”