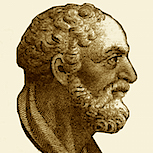 Founder of the Greek Middle Academy and the first to adopt Academic Skepticism doubting the ability of the senses to discover truth, Arcesilaus debated against the Stoic belief that reality can be known with certainty. He didn’t doubt that “truth” exists, only that it could be confined in concepts. This led to an emphasis on practical life like in the Zen tradition (“chop wood, carry water”) with a disregard for speculation, superstition, and belief systems; an emphasis on moderation; and an early appreciation and respect for a philosophy of doubt (though he was accused by Pascal of becoming a dogmatist in later life - a testament to the power of herd instinct and the desire to belong above creativity and openness).

“Nothing is certain, not even that.”

“Where you find the laws most numerous, there you will find also the greatest injustice.”

“Death, of all estimated evils, is the only one whose presence… only causes concern during its absence.”