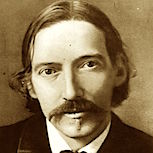 Humanist, social and political critic, poet, composer of over 120 complex musical works, 26th most translated author in the world; Stevenson grew up in a religious family of engineers frail, sickly, and alienated. His father once said, "You have rendered my whole life a failure.” Fiercely criticized by Virginia Woolf and early literary critics but praised by Borges, Proust, Arthur Conan Doyle, Hemingway, Kipling, Jack London, and Chesterton; he now ranks alongside Henry James and Joseph Conrad. In spite of physical frailty, he traveled widely and supported his writing with hard labor and a frugal lifestyle often surviving long periods living on less than 40¢/day. He saw himself, his time, and culture with a rare self-clarity that cut to the deep basic goodness manifesting in his unforgettable characters.

“Keep your fears to yourself, but share your courage with others.”

“I can teach anybody how to get what they want out of life. The problem is that I can't find anybody who can tell me what they want.”

“We are all travelers in the wilderness of this world, and the best we can find in our travels is an honest friend.”

Chapters: 35. The Power of Goodness

“To know what you prefer instead of humbly saying Amen to what the world tells you you ought to prefer, is to have kept your soul alive.”

“Quiet minds cannot be perplexed or frightened but go on in fortune or misfortune at their own private pace, like a clock during a thunderstorm.”

“Under the wide and starry sky,
Dig the grave and let me lie.
Glad did I live and gladly die.”

“It is perhaps a more fortunate destiny to have a taste for collecting shells than to be born a millionaire.”

“I have convinced myself (for the moment) that we had better leave these great changes to what we call great blind forces: their blindness being so much more perspicacious than the little, peering, partial eyesight of men.”

“There are two things that men should never weary of, goodness and humility; we get none too much of them in this rough world among cold, proud people.”

“We find not much in ourselves to admire, we are always privately wanting to be like somebody else. If everybody was satisfied with himself, there would be no heroes.”

“He who asks is a fool for five minutes, but he who does not ask remains a fool forever.”

“If Christ were here there is one thing he would not be – a Christian.”

“Civilization is a limitless multiplication of unnecessary necessaries.”

“I used to think meanly of the plumber; but how he shines beside the politician!”

“Don't judge each day by the harvest you reap but by the seeds that you plant.”

“Life is not a matter of holding good cards, but of playing a poor hand well.”

“Everyone lives by selling something.”

“Perpetual devotion to what a man calls his business is only to be sustained by perpetual neglect of many other things.”

“For my part, I travel not to go anywhere, but to go. I travel for travel's sake. The great affair is to move.”

“Marriage is one long conversation checkered by disputes.”