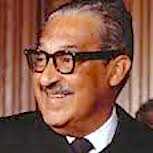 Thurgood Marshall (1908 – 1993) Grandson of a slave, refused admission to a law school because he was black, and first African-American Supreme Court Justice; Marshall was instrumental in the Brown v. Board case that desegregated public schools, helped the United Nations draft the constitutions of Ghana and Tanzania, and - before he became Justice - won more Supreme Court cases than anyone in history. He ruled in favor of Roe v. Wade abortion rights, worked to eliminate the death penalty, and probably more than Malcolm X and Martin Luther King made the Civil Rights Movement successful. He remained a tireless and highly effective voice for human rights, individual freedom, the poor, downtrodden and for all people

“In recognizing the humanity of our fellow beings, we pay ourselves the highest tribute.”

“I have a lifetime appointment and I intend to serve it. I expect to die at 110, shot by a jealous husband.”

“The death penalty is no more effective a deterrent than life imprisonment… It is also evident that the burden of capital punishment falls upon the poor, the ignorant and the – underprivileged members of society.”