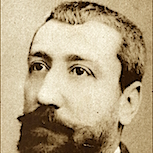 Son of a bookseller and true bibliophile, librarian for the French Senate, and modern lineage holder of Epicurean thought; Anatole France was venomously attacked by Nazi collaborators but defended and admired by George Orwell. His entire set of writings were banned and prohibited by the Roman Catholic Church but in 1921 awarded the Nobel Prize in Literature "in recognition of his brilliant literary achievements, characterized as they are by a nobility of style, a profound human sympathy, and grace.” Journalist, poet, social commentator, historian, playwright, and famous novelist; he became the model for a narrator in Proust's In Search of Lost Time.

The Garden of Epicurus

The Crime of Sylvestre Bonnard, 1881

“An education isn’t how much you know… It’s being able to differentiate between what you know and what you don’t.”

“The poor have to labor in the face of the majestic equality of the law, which forbids the rich as well as the poor to sleep under bridges, to be in the streets, and to steal bread.”

“We must die to one life before we can enter another.”

“To imagine is everything, to know is nothing at all.”

“I thank fate for having made me born poor. Poverty taught me the true value of the gifts useful to life.”

“Nine tenths of education is encouragement.”

“It is possible that our millions of suns make up altogether but a spec in a minute insect in a world vast beyond our ability to imagine which is in some other world no more than a speck of dust.”

“If we knew everything, we could not endure existence a single hour.”

“Until one has loved an animal a part of one's soul remains unawakened.”

“The fool doth think he is wise, but the wise man knows himself a fool.”

“The greatest virtue of man is perhaps curiosity.”

“Time deals gently only with those who take it gently.”

from The Crime of Sylvestre Bonnard, 1881