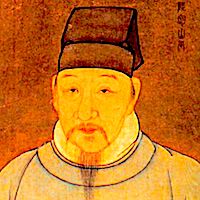 Professor, magistrate, and half of the most famous debate in Chinese history during a time when the influence between Taoism, Buddhism and Confucianism was being re-balanced; Lu Hsiang Shan led a simple but profound life. His philosophy of Universal Mind was forgotten for almost 300 years but then—revived by Wang Yangming—became the second most influential school and a major influence on neo-Confucianism. He developed Mencius' concept of the basic goodness of original mind and brought the simplicity and spontaneity of Daoism and the problems with desire from Buddhism into the blend with Confucianism that became neo-Confucianism.

“The most important thing to learn is how to discriminate between Righteousness and Profit.”

“Don't only study the words and deeds of past sages but examine deeply the records of the rise and fall of dynasties, order and disorder, right and wrong, gain and loss.”

“When have I ever opposed the reading of books? It is only that I differ from others in the way I read... so that students do not follow upon someone else's heels or depend on teachers, friends, and books.”

“There must be knowledge before there can be will. Extensive study must come first, earnest practice last.”

“Reading should be an active search for the vital arteries, not a matter of understanding only the words, the literal meaning which only leads to being harmed by what we read.”

“The mind is morally self-sufficient, endowed with innate knowledge of the good, and an innate ability to do good. It is one and indissoluble. It fills the whole universe… The investigation of things means nothing more than to investigate this mind.”

“The words of the sages and men of wisdom are spread out in books... They may be compared to the prescriptions in a medicine basket... However, what a good doctor uses need not be extraordinary, it need only be good enough to cure an illness.”