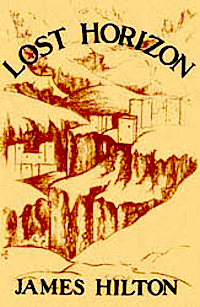 The first "mass-market" paperback, Pocket Book #1, one of the most popular novels of the 20th Century, Hilton’s crowning work of art, and a profound influence on world culture; Lost Horizon put the the symbolism of Shambhala or Shangri-La on the map of our cultural imagination. Still in print today 85 years later, it became a symbol and inspiration for seekers of peace, wisdom, and happiness throughout the world. Although based on Hilton’s strong hatred of war, it soon became caught up in war dialog when—after Pearl Harbor, when the US first bombed Tokyo—President Roosevelt was asked where the planes were based, he answered “A base in the Himalayas called Shangri-La.” Hilton said about this novel, “There is no book of mine whose success I ever desired more keenly for it was the expression of a mood for which I had always hoped to find sympathizers.”

“We believe that to govern perfectly it is necessary to avoid governing too much.”

“… crime was very rare, partly because only serious things were considered crimes, and partly because everyone enjoyed a sufficiency of everything he could reasonably desire.”

“...they didn’t think there was anything very odd in anyone being a little odd.”

“But pretense was impossible. There was a quality in the air of Shangri-La that forbade one the effort of counterfeit emotion.”

“If I could put it into a very few words, I should say that our prevalent belief is in moderation. We inculcate the virtue of avoiding excesses of all kinds—even including, if you will pardon the paradox, excess of virtue itself.”

“Laziness in doing stupid things can be a great virtue.”

“Life's more important than a living. So many people who make a living are making death, not life. Don't ever join them. They're the gravediggers of our civilization - The safe men. The compromisers. The moneymakers.”

“Look at the world today… What madness there is! What blindness! A scurrying mass of bewildered humanity crashing headlong against each other. The time must come, my friend, when brutality and the lust for power must perish by its own sword. For when that day comes, the world must begin to look for a new life. And it is our hope that they may find it here.”

“Our people would be quite shocked by having to declare that one policy was completely right and another completely wrong.”

“People make mistakes in life through believing too much, but they have a damned dull time if they believe too little.”

“The English regard slackness as a vice. We, on the other hand should vastly prefer it to tension. Is there not too much tension in the world…”

“The jewel has facets and it is possible that many religions are moderately true.”

“The will of God or the lunacy of man - it seemed to him that you could take your choice, if you wanted a good enough reason for most things. Or, alternatively, the will of man and the lunacy of God.”