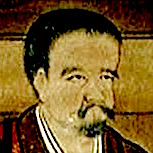 Along with Dogen and Hakuin, one of the most influential Japanese Zen masters, Bankei developed a teaching he called “Unborn Zen” - a refinement D. T. Suzuki called “one of the most original developments in the entire history of Zen thought.” As a student, Bankei traveled widely, studied Confucian texts, practiced
Shin Buddhism, studied with many famous scholars, became a monk, but remained unsatisfied. Seriously ill and with a fatal prognosis, a near-death experience led to his enlightenment and return to health. Refusing a senior position in his monastery, he instead worked in the kitchen and then moved to the mountains living as a hermit and developing his teaching of seeing into the true nature of existence.

“Rather than trying to become a buddha, nothing could be simpler than taking the shortcut of remaining a buddha!”

Chapters: 10. The Power of Goodness

“Originally, thoughts have no real substance… if they arise, just let them arise; if they stop, just let them stop. As long as you’re not attaching to these reflected traces, delusions won’t be produced.”

“Self-nature is empty and illuminating, so let things take care of themselves”

“Chasing after words, pursuing phrases, when will you ever be done?”

“Trying to suppress delusion is delusion too. Delusions have no original existence; they’re only things you create yourself by indulging in discrimination.”

“Illuminate original mind and no other understanding is necessary.”

Chapters: 16. Returning to the Root, Meditation

“We never came into being and we never go out of being. All of these coming and goings are just pulses in the pattern. ”

“Enlightened awareness is within each one of us, right at this moment… without effort rest naturally as the Unborn Mind, as a living Buddha.”

“People have no enemies, none at all right from the start. You create them all yourself fighting over right and wrong.”

“Clear are the workings of cause and effect. You become deluded, but don't know it's something that you've done yourself... what's called self-centeredness.”

Themes: Cause and Effect Delusion

“Though the years may creep ahead, mind itself can never age. This mind that's always just the same—Wonderful! Marvelous! When you've searched and found at last the one who never will grow old”

“The Pure Land where one communes at peace is here and now, it's not remote millions and millions of leagues away.”