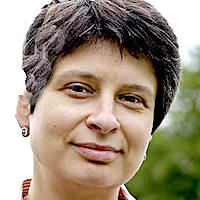 The adopted granddaughter of Nikita Khrushchev and daughter of his biological granddaughter, Nina grew up in the midst of an intense political environment witnessing the rise and fall of Soviet Russia. She saw first hand how Khrushchev was vilified in both Russia and the USA while repudiating Stalin’s legacy of terror and totalitarianism which killed between 30 and 60 million people, releasing millions of Stalin’s victims from gulags, and spearheading reforms that allowed greater political, personal, and artistic freedoms. Now an American Professor of International Affairs, Senior Fellow of the World Policy Institute, and a Contributing Editor to Project Syndicate; she shares her insightful political commentaries in Newsweek, The New York Times, The Wall Street Journal, The Financial Times and in many other publications and boo

“Aldous Huxley predicted, ‘What we love will ruin us’ and described a human race destroyed by ignorance, lust for constant entertainment, technology, and too many goods.”

“It is precisely the American economy that has dumbed so many down.”

“Politicians are the same all over. They promise to build a bridge even where there is no river.”

“I am not afraid of the devil, and you are just a man.”

“Any fool can start a war, and once he's done so, even the wisest of men are helpless to stop it - especially if it's a nuclear war.”

“Over the last few years, Pope Francis has reinvigorated the Catholic Church’s core message with passionate criticism of unbridled capitalism and a new, more progressive worldview.”