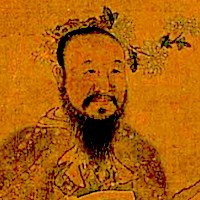 "King of the Water Immortals"

Patriotic poet, politician, Chu royal clan official, and inspiration for China's Dragon Boat Festival; Qu Yuan wrote at least some of the Chu Ci (Songs of the South) poems—one of China's two most famous ancient collections. Slandered and exiled by corrupt officials while helping King Huai, the same thing happened while advising King Qingxiang causing him to spend his time collecting folk tales and legends while writing some of China's greatest poetry. In a deep depression from his exiles as well as the Qin State's conquering of his country's capital, he committed suicide as a way of protecting his integrity. Mao tried to replace Confucius with Qu Yuan as a cultural hero.

Nine songs: a study of shamanism in ancient China (1955)

Princess of the Hsiang

“The gates of Heaven are open wide; off I ride born on a dark cloud... one Yin for every Yang.”

from Nine songs: a study of shamanism in ancient China (1955)

“Age creeps on apace, all will soon be over;
If only it could be forever as this time it was!
But man's fate is fixed;
From meetings and partings none can ever escape.”

from Nine songs: a study of shamanism in ancient China (1955)

“Alas! all joy has vanished from my life,
Alone beside the hill.
Never to follow fashion will I stoop,
Then must live lonely still.”

“Now, the phoenix dispossessed,
In the shrine crows make their nest.
Withered is the jasmine rare,
Fair is foul, and foul is fair,
Light is darkness, darkness day,
Sad at heart I haste away.”

“Can one gather water lilies from the the boughs of a tree?
When hearts are not at one, the match-maker wearies;
Favor that was but scant is lightly severed...
In our union was no faithfulness, only grief has lasted;
She did not keep her tryst”

from Princess of the Hsiang